Ran across this weird little Boomer meme the other day. My GenX butt just had to pick it apart point by point.

First of all, bologna. Ewww. I remember eating a lot of sliced turkey though and my parents never had soda in the house. I do remember when Mom started making Koolaid using neutrasweet. Apparently the aspertain made us crazy hyper so she stopped that right quick.

I’m sure I played in the dirt a lot. That’s what the sandbox was for right? But my main dirty memory was using the garden hose to dig a hole. Just point it at the ground and see how deep you could go. Up to my shoulders at least.

My butt was never spanked but was also a self flagellating kid. I remember sending myself to my room for a number of offences.

We had all of the Networks. NBC, CBS, and ABC. We also got the Public Television (for Mr. Rogers and Doctor Who) and two independent stations. One of the showed horror movies on Saturday afternoons and the other became a fox affiliate before I got to high school. You had to have an outdoor antenna to get them all and my Papa even sprung for a remote rotated to get the antenna to point for better reception.

School actually still starts with the Pledge. Both of my kids know it. It is a weird form of “kids these days” to think it somehow went away. The same goes for bedtimes though I will sit to quite a bit of late night reading with the covers up over my lamp.

I may have ridden in the back of a pickup once. Much more common was climbing out the window and hanging onto the roof of a moving car. Ok, I am a little surprised that one didn’t kill me.

Geeky little me wanted to hear the songs from the 1984 Transformer Movie. The radio wouldn’t play those even when I called in to request them. Side note on learning courtesy: I remember once calling on to request a song and dedicating it to a couple of my friends. Then when I wanted to let them know I had done that, they weren’t around so I called up another friend and told her to listen. Only in retrospect do I wince about how much of an asshole move that was.

I already told my hose story and the rest of them I just didn’t do. For one, I was an irreverent little bastard and secondly my kids have more access to a creek now than I did back then. I do remember catching crawfish in Look Park one year. Google tells me there are five different species of crawfish living in Massachusetts.

What this meme doesn’t talk about is the importance of bikes. Getting on your bike in the morning and just going for the day. When I got to my middle school solitary period I was addicted to all things AD&D (First edition baby!) and the best place to get those was at the mall. Figuring out how to bike to the mall before the bike trail went the full way was an effort in futility but I did find a lot of other cool things along the way. 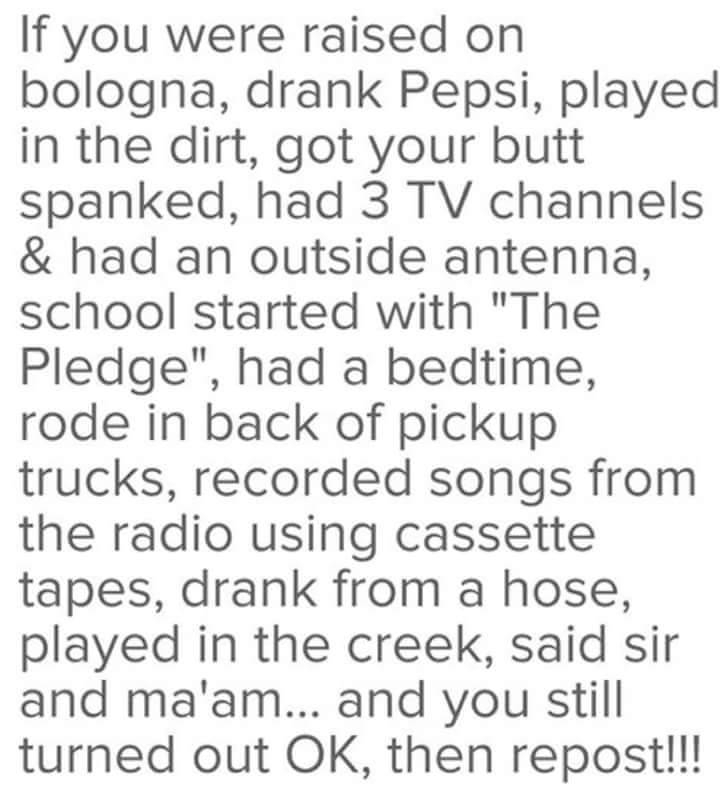