Almost three years ago now, I was coming off a good run playing Mutants and Masterminds when a friend of mine invited me to get involved with a Pathfinder game that he was starting. I was a little hesitant but also suffering a fair amount of angst over scheduling issues so agreed to it.

The group I joined up with evolved quite a bit as did the character I was playing. Strego the Half-Orc sorcerer originated as a gish fighter type but after a near death experience he converted to the service of the dwarven god and became a holy warrior. By the time that campaign ended in a final battle against an emerging demon lord Strego had taken some levels in Oracle and then respeced himself fully into the role of oracle. Similarly, the group saw several comings and goings including three rogues, a dead barbarian, and a monk who lasted all of one session.

During the course of Strego’s advancement, I looked for ways to take advantage of his high Charisma. This led to my outcaste holy warrior adopting a half-drow holy warrior to mentor. Enter Jh’enna the Paladin. Many of Strego’s spells and abilities are buffing related so while she became the front line fighter, he would move to the back and use his magic to power her up. This was especially useful as his oracle drawback had Strego speaking Terran during combat which I conveniently gave Jh’enna a rank in.

With the campaign over, the group continued to evolve into a new campaign. The DM is unfortunately moving away but our first DM seems to have gotten over his fatigue and is taking back the reigns and starting up part 2 of his previous game.

At the end of the last campaign, Strego had blown most of his gold on purchasing a magical intelligent mace which he had given to his front line fighter cohort. That is three sentient characters for me to keep track of. My plan is to move Strego back into NPC territory, move his cohort up to PC status… and we’ll see what happens with the intelligent mace.

New game in a little more than 24 hours.

EDIT: At the last minute (and after an ernest discussion with my 6 year old son about it) I decided to keep Strego as the main character and have Jh’enna remain his cohort. Link to Strego’s character sheet can be found up at the top now as well. And here is what Strego looks like: 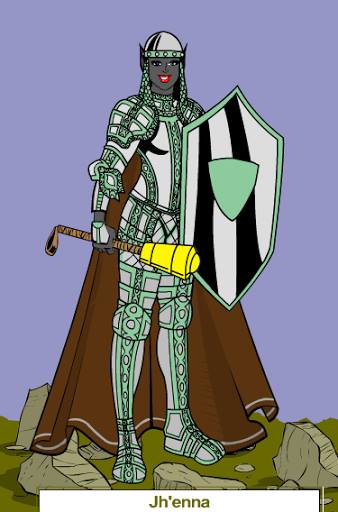