It has been a few months now since I’ve been playing in a Pathfinder game set in Five Kings Mountains area. The main plotline that we’ve latched onto as a party has been the rise of a murder cult related to evil god Norgorber in his incarnation as ‘Father Skinsaw’. Mostly it has related to our band of manly men trying to prevent the murder of young nubile girls. Though the members of the party follow their own deities, the cleric and paladin (my character) are both worshipers of Torag so we have strong ties to the Church of Torag as well as the Church of Iomedae when Torag isn’t immediately available.

As time has gone out, it has come to our attention as players that our overall preference is as a wandering band. Setting up a home base just isn’t going to happen. On the other hand our primary treasure has become weapons. Steel. This last adventure we pulled into the town of Detmer with a couple thousand gold pieces worth of acquired weapons from various vanquished foes along the way. As a first step, we’ve gotten our hands on a wagon. The problem with wagons is that they’re open topped and more or less unsecured. What doesn’t seem to exist in this world we’re adventuring in is something like a Gypsy Vardo-style Wagon. Someplace where we an lock our stuff up and not have it stolen by wandering bands of Goblins while we delve into some god-forsaken temple.

The closest thing I’ve found in the rules is a Carriage which is really designed more for carrying people rather than cargo. Purchasing a carriage is only 100GP however, I can’t imagine that getting a hard core Vardo would be too much more.

Going to have to talk to the GM. 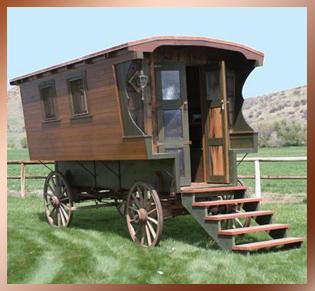